Orientation as a tool for the attractiveness of TCLF sectors

Orientation as a tool for the attractiveness of TCLF sectors

The labour market in TCLF sectors shows many problems: a high unemployment rate, a significant discrepancy between the demand and supply of labour force, followed by the gap between the professional skills provided by the training system and those actually required by the labour market.

In this context, young people who are starting to build their professional lives face an increasing number of challenges and difficult choices, and they need information about training paths and job opportunities.

It is essential to develop an offer of quality services, which allow young people to guide their choices, opting for paths consistent with personal expectations but also with the needs of the clothing, textile, leather, and footwear labour market, in order to avoid vicious cycles with no exit.

A significant boost is needed, in order to facilitate transitions between fashion-focused education systems and the labour market. This impulse can be implemented through tools such as an adequate system of employment services, the offer of quality guidance services, and the possibility(for the young people themselves), to acquire work experiences through apprenticeships and internships already during the school cycle.

In order to reduce the risks of exclusion of individuals from the labour market, it is necessary to operate on different, but strongly interconnected levels:

To provide answers to these needs, an ad hoc project funded by the European Social Fund was born in Veneto – one of the 20 Italian regions – with the aim of supporting the implementation of innovative guidance interventions aimed at middle and high school students, to their families and to unemployed young people under 25 resident in the Region.

Orientati (in English Orient yourself) is the name chosen by the Veneto Region to identify the program in support of youth orientation activities.

The model chosen for the provision of guidance activities provides for the direct operation of territorial Networks, which are participated by more than 700 public and private organizations, that can play an active role in the provision of guidance services such as schools, training organizations, employment agencies, Municipalities, ITS Foundations (Higher Technical Institutes), Universities, Chambers of Commerce.

In this context, Politecnico Calzaturiero, partner of the Skills4Smart TCLF project and leader of one of the Regional Networks, has implemented its orientation project called Orientarsi in Rete with a particular focus on the Fashion/Footwear sector, given the great specificity of the territory and the great needs that emerge from what has been described in the previous points.

The project, visible with those of the other networks on the site www.orientati.org and that has an own website www.poliorienta.info, aims to be a push towards the enhancement of the production sectors of excellence in the territory, the schools, the ITS, and universities that allow preparing the professional profiles required by companies in the fashion world.

The orientation interventions were designed in a way to support each recipient in such moments.

* Middle school children, also through the involvement of families, can gain greater awareness of their identity and on the skills necessary to collect information in more depth, and decide their school path based on their interests, attitudes, values, and aspirations.

* Second grade and VET students, on the other hand, can obtain from participation in orientation activities, the skills, and information necessary to plan their training or higher education path, or plan an effective insertion into the world of work.

* For the unemployed and non-employed, the goal is to increase their knowledge about the opportunities for training reintegration and job placement in the Veneto Region for the Fashion sectors, bridging information asymmetries and shortening the gap between skills, interests, personal aspirations, and productive reality.

The activities implemented within the project are:

* Network laboratories as an operational and virtual experience

The virtual laboratories are structured as e-learning modules or interactive tools and include videos, infographics, and tests, created specifically for specific target groups.

The operational laboratories, on the other hand, provide for a direct confrontation with sector technicians at second-grade schools, VETs, universities, ITS Academy, or companies belonging to the regional production fabric for the clothing or footwear sectors. 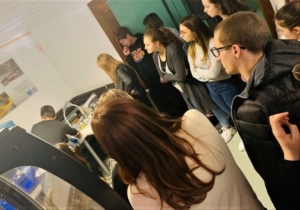 * Orientation days on the territory and on the fashion chain

The orientation days consist of meetings in the form of exhibitions, workshops, or seminars, organized at significant innovation venues at the regional level (leading companies, incubators, etc.) or ITS Academies and Universities.

Support provided to the individual recipient implemented not only during moments of choice or transition but also in the event of a possible revision of the choice of school path in the first two years of the second-grade school.

Questionnaires and other tools aimed at activating self-awareness, one’s attitudes, interests, values, and inspirations, administered both in person and via the web.

Orientation means putting a person in the condition of being aware of himself, of his own personality, potential, talents, and aspirations.

What we choose today affects our tomorrow.

And these choices, if not reasoned with criticality and awareness, risk influencing not only the personal and working path of the subject, but also the entire labour market of the TCLF world, which increasingly needs a young and well-trained workforce.