A creative and diverse industry with strong values

The European footwear industry is a traditional and innovative manufacturing industry that produces a high-quality product which enjoys global recognition. This success stems from the ability of European footwear companies to bridge craftmanship, creativity and innovation with the support of the latest technologies, resulting in a product that is unique in terms of quality and design.

European footwear companies manufacture a wide-range of products, from everyday shoes to luxury items. Creating a shoe follows several processes than include more than 200 operations in which skills and competences are essential. Moreover, a shoe is more than fashion: its high quality and standards are key to ensure a prolonged and healthy life by reducing risks of future back/ foot problems.

Since 2011, the European footwear industry has kept growing at a steady pace despite the high unemployment rates in Europe. In 2017, the sector was composed of 21,000 companies directly employing around 280,000 people and generated a 24,7 billion EUR annual turnover. In terms of structure, the sector is predominantly composed of small and medium-sized companies.

A highly-sought after product: dynamics of international trade

The popularity of European footwear is best evidenced by looking at international trade numbers. As many as 9 out of 15 top exports in terms of value are European, i.e. Italy (3rd), Germany (4th), Belgium (5th), Netherlands (7th), France (8th), Spain (9th), Portugal (11th), UK (12th) and Poland (15th). The appetite of global consumers for European footwear is constantly growing as EU exports to third countries have increased by 51% in quantity and 125% in value from 2009 to 2018. European shoes are also highly-desirable within Europe itself: intra-European trade represents 1/3 of the world footwear trade.

The main footwear manufacturing regions are situated in Italy, Poland, Portugal, Romania and Spain. Italy is the front-runner as it accounts for almost 50% of total EU footwear production. The geographical presence of the industry across the continent is also characterised by the concentration of companies in clusters with highest presence in the Valencian region in Spain, the Marche, Veneto and Campania regions in Italy, Northern Portugal and North-western and Central Romania. 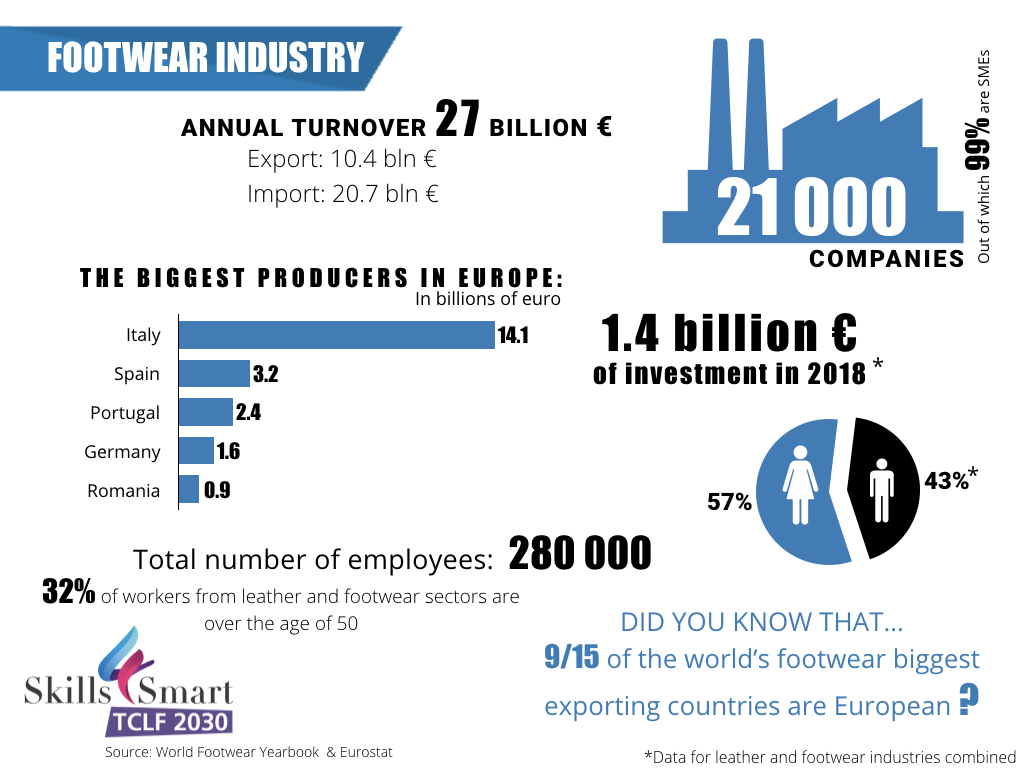